Here’s a chart from the OBR that I really don’t like:

I don’t mean to attack the OBR here, which I think generally does decent work. I’ve seen this sort of chart reproduced by all sorts of otherwise reputable people. But it is horribly misleading. It’s not that there is anything wrong in the chart. It’s just that the way it’s constructed and the patterns that jump out at you feed a narrative that is both wrong and pervasive.

Try looking at the chart without reading any of the text. What do you see? A blue line and a yellow line that jump around a lot but sort of follow each other; and two points where the blue line shoots up. And what’s that blue thing that shoots up? Public spending.

Except public spending didn’t actually shoot up. These two points are the biggest recessions in modern history, and while recessions do lead to increased spending thanks to automatic stabilisers, they mainly lead to lower GDP. That’s kind of the definition of a recession.

This may sound obvious and, of course, the people who make these charts know all of this. But when the government and large sections of the media are pushing a narrative that public sector spending was and is out of control, communicating the facts clearly is important.

So how could we do this better? Something along these lines would be a good start: 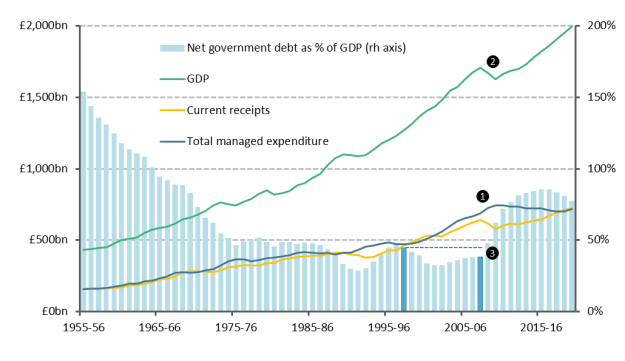 This chart shows spending, receipts and GDP in real terms (13/14 prices), as well as total public debt as a share of GDP[i]. This shows three important things about the recent financial crisis that we can’t easily get from the OBR chart.

This stuff is all pretty basic, but this narrative is largely missing from the mainstream media and instead confined to economics blogs. Maybe this is because of media bias or ignorance. But maybe it’s also partly because we aren’t doing a good enough job of presenting the data that we have.

[i] As I said, it’s usually a good thing to think about public finances as a share of GDP, except when it’s not.